September 11, 2011 Cassandra Milligan Alternative Energy
The U.S. Department of Energy announced this week a new package of $231m to support the development of solar wafer technology, offshore wind, and geothermal energy. The largest initiative was for a $150m loan guarantee to 1366 Technologies – they’ve been developing a process that uses molten silicon to dramatically reduce the cost and the Related posts: A cheaper way to make silicon solar cells from 1366 Technologies Solyndra snags $535 million federal loan guarantee and boosts performance of its cylindrical solar panels IBM pioneers process to turn waste into solar energy
END_OF_DOCUMENT_TOKEN_TO_BE_REPLACED

New Catalyst For Ethanol Made From Biomass

August 1, 2011 Cassandra Milligan Biofuels
Share Researchers potentially find a renewable path to fuel additives, rubber and solvents The right balance of zinc and zirconium oxides in this catalyst (purple block) converts ethanol to isobutene with low amounts of unwanted byproducts such as acetone and ethylene. RICHLAND, Wash. Researchers in the Pacific Northwest have developed a new catalyst material that could replace chemicals currently derived from petroleum and be the basis for more environmentally friendly products including octane-boosting gas and fuel additives, bio-based rubber for tires and a safer solvent for the chemicals industry. To make sustainable biofuels , producers want to ferment ethanol from nonfood plant matter such as cornstalks and weeds. Currently, so-called bio-ethanol’s main values are as a non-polluting replacement for octane-boosting fuel additives to prevent engine knocking and as a renewable replacement for a certain percentage of gasoline. To turn bio-ethanol into other useful products, researchers at the Department of Energy’s Pacific Northwest National Laboratory and at Washington State University have developed a new catalyst material that will convert it into a chemical called isobutene.
END_OF_DOCUMENT_TOKEN_TO_BE_REPLACED

June 16, 2011 Cassandra Milligan Solar
Historic $1-Per-Watt Solar Modules Just Months Away El Segundo, Calif., June 16, 2011—The photovoltaic (PV) industryappears set to achieve a major milestone with the selling prices of crystalline silicon (c-Si) modules projected to drop to $1 per watt by the first quarter of 2012, a significant benchmark level that could forestall a widely feared dip for solar installations next year and stimulate demand instead, according to new IHS iSuppli (NYSE: IHS) research. An assessment of this magnitude, bold in its purview and implications, comes in the wake of an accelerated, rapid decline in pricing for deals following the Intersolar Trade Fair, site of the world’s largest PV exhibition, held last week in Munich, Germany. Going into Intersolar, spot prices from the top Chinese brands, among the major players in the market, had been running at $1.49 per watt for mainstream c-Si modules. By the time Intersolar wound up, prices had fallen to $1.30 per watt, ostensibly hastened by the market’s fear toward a flat—or worse, negative—market in 2012.
END_OF_DOCUMENT_TOKEN_TO_BE_REPLACED

END_OF_DOCUMENT_TOKEN_TO_BE_REPLACED

New York City’s Brooklyn Bridge Park is getting even greener with the addition of a solar powered electric vehicle (EV) charging station – the first of its kind in New York City. Brooklyn Bridge Park has already added a number of green areas with lush grass, making it a great spot for both locals and tourists to enjoy the fabulous view of Manhattan and this EV charging station is the latest and unique green energy addition. The station will likely reduce the carbon emission inside the park to a great extent. A Gift from Beautiful Earth Group This solar powered EV charging station, the very first in NYC, is a gift from Beautiful Earth Group (BE), a renewable energy company based in Brooklyn. Before donating it, BE operated the station for its own use out of an industrial lot in Red Hook. Now the station has joined the sustainability endeavors of Brooklyn Bridge Park.
END_OF_DOCUMENT_TOKEN_TO_BE_REPLACED

April 26, 2011 Cassandra Milligan Alternative Energy, Solar, Transportation
While solar-power electric hybrid vehicles are a proven success story on the roads, the time is ripe for the appearance of solar-electric watercraft. Already a pontoon boat – Loon – is available in the market. It is solar-electric powered and can seat eight passengers. Now a smaller one – the purely electric run, Infinyte I4 – is the new kid in the block. Plans for a bigger boat solar-electric type are also on the anvil. Looks With a similar looking bow and stern, the i4 boat does have a unique appearance, which as per claim is aiding and increasing the boat’s progress in the water. The boat is about 14 feet long and has twin 24 V motors. The motors are manufactured by Mercury Marine’s Motor Guide Division. The boat can be steered and controlled with a joystick. The boat weighs about 223 kg (710 lb). Performance The maximum speed it can achieve is 13 kph (8mph).
END_OF_DOCUMENT_TOKEN_TO_BE_REPLACED 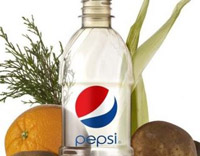 PepsiCo is one of the leading food and beverage businesses in the world. Since 2010, it has been focusing on protecting the earth’s natural energy resources with competent use of soil, water, power and finding and focusing on innovative ways to do so. Recently PepsiCo developed the world’s first plastic bottle made entirely from renewable and plant-sourced raw materials. This, in contrast to the traditional PET bottle leaves less carbon trace on our planet. A trend-setter and leader in green sustainability The latest in PepsiCo’s green efforts is the ‘green’ bottle – manufactured from raw materials which are bio-based like: corn husks, switch grass and pine-barks. Soon bi-products from its own food business, like potato peels, orange peels and oat hulls will be utilized for producing the green bottle. This bottle is entirely plant based, from fully renewable resources and is 100% recyclable. This is identical in looks, feel and function as the petroleum-based PET bottle.
END_OF_DOCUMENT_TOKEN_TO_BE_REPLACED

Vietnam is setting an example in setting up a stunning green center with the ongoing project called South Saigon Yacht Park. Right in the heart of Ho Chi Minh City, the state capital, plans are afoot to create a green oasis to spread the message of green revolution across the country. This Yacht Park is the first step towards making a glass-concrete jungle to an eco friendly city and to bring back the old world charm of harmony between people and nature. Design of the park The Lib.A – Liberty Architecture team of architects have taken the responsibility of designing this South Saigon Yacht Park. The park will be so designed to show-case Vietnam’s celebrated rich past culture and their glorious legacy as well be the green focus of the famous city. Making a green center amidst the glass and concrete jungle, on the river banks of Saigon will show-case the changing trends in Vietnam leaning towards greener, cleaner and healthier living.
END_OF_DOCUMENT_TOKEN_TO_BE_REPLACED

April 6, 2011 Cassandra Milligan Alternative Energy, Transportation
There have been various methods tried for reducing fossil fuel dependency and containing carbon footprints for a healthier and more eco-friendly future. Corn-produced ethanol has been used for mixing with gasoline but there have been side effects like corrosion from ethanol. Also huge tracts of precious farmlands need to be diverted for corn production. But now new research has thrown up results that show common algae can be used for biofuel production. New Research There has been research going on in University of Arkansas by a group of chemical engineers and research students of Honours College led by Asst. Professor & Project Leader, Jamie Hestekin. The focus is on converting the common algae into renewable fuel which can be used in automobiles with combustible type engines. The research is done on algae which survive on nitrogen, phosphorous, sunlight and carbon dioxide; and from which, organic acids and subsequently biofuel is produced.
END_OF_DOCUMENT_TOKEN_TO_BE_REPLACED

April 3, 2011 Cassandra Milligan Alternative Energy, Energy
“In 88 minutes, the sun provides 470 exajoules of energy, as much energy as humanity consumes in a year.” In Scientific American, Ramez Naam adds, “In 112 hours – less than five days – it provides 36 zettajoules of energy – as much energy as is contained in all proven reserves of oil, coal, and natural gas on this planet.” We have no shortage of energy. Fortunately, we are increasingly producing and delivering more renewable energy at lower cost. At the same time we are more efficient about using energy for everything from lighting, to buildings, to transportation. Most promising is the trend to make energy cheap when plentiful, more expensive at peak, and use intelligent energy management to level the use. The grid is starting to get smart. With a smart grid and national network of high-voltage lines, solar and wind power that are intermittent in single locations become predictable sources of steady power with a smart super grid.
END_OF_DOCUMENT_TOKEN_TO_BE_REPLACED
« 1 2 3 4 5 »