Here’s my take on the EU aviation carbon tax that is causing a stink with major world airline carriers: 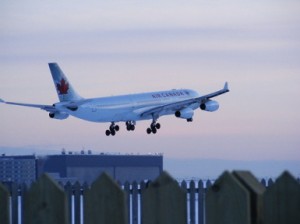 My family flew to North Carolina during the holiday to visit relatives and, being aware of new baggage fees, we made every effort to pack lightly.

Of two adults and two children we had only one item to check in. Not bad. But it still meant paying $25 to get the bag to Charlotte and another $25 to get it back home. Had we each checked just one bag for our one-week trip, it would have cost the family $200.

I point this out because I’m perplexed by Air Canada’s strong opposition to the European Union’s new aviation carbon tax, which went into effect Jan. 1.

The airline — as well as other members of the National Airlines Council of Canada — has no problem arbitrarily adding $50 to the price of a 2,500-kilometre round trip to the United States.

But it won’t tolerate the European Union slapping on a carbon tax that would only add $1.45 to a $500 round-trip ticket between Toronto and Frankfurt, Germany, a journey that covers five times the distance.

How did I come to $1.45? Anyone can calculate the impact on any trip to Europe. Just go to the website of the International Civil Aviation Organization at and click on the carbon calculator link at the bottom-left of the screen.

But that’s not what airlines would initially have to pay per passenger. Under the new European aviation tax scheme, airlines still get a free pass for 85 per cent of their emissions. With the tax only applying to the remaining 15 per cent, that works out to $1.45 that will surely be passed along to consumers.

Yet Air Canada and its fellow airlines in Canada, the United States, China, India, Russia and Japan insist on demonizing the fee and amplifying talk of trade wars and unproven claims of job destruction. It doesn’t matter that the European Union Court of Justice ruled recently that the new tax does not contravene international law.

“This ruling by no means settles this matter,” George Petsikas, president of Canada’s airline council, said defiantly after the European court ruling.

Those opposed to the EU’s actions argue that the matter of emissions reductions in the global aviation industry is best addressed through a “coherent, multilateral framework” via the International Civil Aviation Organization (ICAO).

The solution, they feel, is to create yet another international initiative that likely will lead to more delay and inaction on pressing climate matters.

Been there, done that. What’s admirable about the EU approach is that it’s about more action and less talk. Understandably, it’s tired of waiting for the rest of the world to get its act together.

To be fair, the industry hasn’t been idle. Fuel efficiency has improved by 16 per cent between 2001 and 2008, according to the International Air Transport Association. Since 1990, major Canadian airlines have improved fuel efficiency by 31 per cent.

But it’s not enough, and there’s a whole lot more that can be done. A sector-specific carbon tax that grows gradually and includes more countries over time will accelerate innovation and give the most fuel-efficient airlines an edge over competitors.

As airline fleets are renewed there will be greater incentive to embrace more efficient engine technology and light-weight materials, such as carbon fibre, in the design of new aircraft.

The air transport association estimates the industry will spend $1.5 trillion on new aircraft by 2020, resulting in more than a quarter of the global fleet being replaced. It’s important to make sure new aircraft are built and purchased with fuel-efficiency top of mind.

Airlines will also be more motivated to use renewable jet fuel products in old and new aircraft to offset their carbon footprints. There’s tremendous promise with respect to carbon-neutral jet fuels derived from algae, wood waste, inedible plants such as camelina, and even industrial waste gases.

One advantage is that aviation is a relatively easy market to target. There are fewer than 2,000 airports around the world that serve as major fuelling hubs for airplanes, so the required infrastructure changes to accommodate renewable jet fuel are quite manageable. Contrast this with the hundreds of thousands of fuelling stations that service cars worldwide.

Jet fuel also represents less than 8 per cent of global demand for oil products, so it’s not as daunting as tackling the market for consumer vehicles, which consume more than 40 per cent of oil supply.

The industry says it is already going down this innovation path. That only makes the EU carbon tax even more benign. The EU, meanwhile, has said that any airline headquartered in a country with similar emission-reduction policies would be exempt from the EU tax.

So what, exactly, is the fuss all about? It’s about the rest of the world not liking Europe taking the lead and telling it what to do, and even though it’s clear that we need to do it.

It certainly isn’t about the financial interests of travelers, who have been and will continue to be penalized much more by arbitrary fees designed to pad the bottom line.