The 2011 Chevrolet Volt became the first electric car to be chosen as the Green Car of the Year 2011. Chevrolet Volt received this honor at the Los Angeles Auto Show, which is held 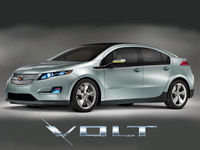 every year by the Green Car Journal. The 2011 Chevrolet Volt electric car was chosen as the electric car of the year by an eminent jury, which consisted of the editors of Green Car Journal, Jean Michel President of Ocean Futures Society, Carl Pope Chairman of Sierra Club, and the host of Tonight Show Jay Leno, who happens to be a big fan of cars.

The competition for the Green car of the year was tough. In the finals 2011 Chevrolet Volt had to compete in this category with other big names in the field of electric cars like the Nissan Leaf, the Lincoln MKZ, Hyundai Sonata, two hybrids and a Ford Fiesta subcompact.

So what makes 2011 Chevrolet Volt, run on electricity a green car? The following two features contribute in this direction,

Motor Trend and Automobile Magazine has also named Chevrolet Volt, which will be available in the open market very soon, as the car of the year.

Apart from being voted the Green car of the year, General Motors, which makes Chevrolet, is also taking other steps to do its bit to clear up the environment, which is being polluted by its cars. It has contributed $40 million as donation to a local environment project in the US hoping to reduce carbon emission by 8 million metric tons. Since the 1.9 million Chevrolets sold before 2012 are expected to release roughly the same amount of carbon dioxide, this will kind of compensate the environment for the loss General Motors has caused to it.

Mike Robinson, the Vice-President for environment, energy and safety in General Motors says that apart from fuel economy and other features, Chevrolet wanted to do something that makes their brand distinguished. So they have set-up this program, the first by any auto maker.

Taking up Other social obligations.

General Motor’s Vice President of US marketing Joel Ewanick has also said that though it will take two more years to choose such projects. In the future the company will help various projects like small-scale wind energy and weatherizing schools by providing them aid and grants .