The world solar challenge is a race for solar-powered cars, and it has been around since 1987. It takes place every other year, and it brings together dozens of teams from multiple countries across the world. Each team comes with its own unique and innovative solar-powered car, and they all compete for the championship title. The purpose of the whole competition is to encourage individuals, companies and academic institutions to put their resource into researching and developing cars that are exclusively powered by the sun, with the hope that one day, solar power could be a viable alternative to fossil fuel when it comes to running automobiles. Most participants are usually university and company teams, but some high schools have participated in recent competitions. 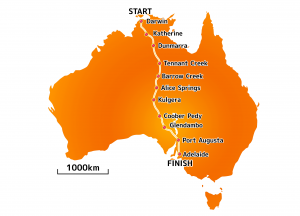 The challenge is usually held in the remote in-lands of Australia, and it starts in Darwin, and goes through Northern Territory, all the way to Adelaide in South Australia. This cross-country solar-powered car race covers a total of 3022 kilometers, and it usually takes about 4 to 7 whole days for most teams to finish. The competition is governed by a set of rules, and competitors have to find a way to utilize solar power in an efficient way and to overcome a set of challenges along the way, all while trying to move as fast as possible through the Australian outback.

The challenge is the brainchild of an adventurer named Hans Tholstrup. This Danish thrill-seeker was the first person to sail around the entire Australian continent in an open boat. A strong champion of sustainable energy, Hans founded several competitions that sought to bring more attention to fossil fuel alternatives. He built the first solar car on the planet and rode it for over 4000 kilometers in 20 days. The world solar challenge was first staged in 1987 after South Australia bought the rights to the race from Hans. The race was held every three years since its inception in 1987 up to 1999, then the organizers switched to staging it every other year.

The first race in 1987 was won by Sunraycer, a solar car that was built by General Motors, which covered the entire distance at an average speed of 67 km/h. Since then, new milestones have been set, and the competitors have become more innovative over the year. The fastest car to ever win the competition was Nuon’s Nuna 3, which managed an average of 102.75km/h, back in 2005. Other remarkable winners over the years include the Nuna 4 which clocked in at 90km/h in 2007, the Tokai Challenger which clocked in at 100.5km/h in 2009, among many others. This year, Nuon Solar, a Dutch team, has won the race for the third time in a row. The race that was concluded on the 12th of October saw Team Nuon come in first in the Challenger Class category with an average speed of 81.2km/h, taking only 37 hours ten minutes and 24 seconds to cover the entire timed distance.