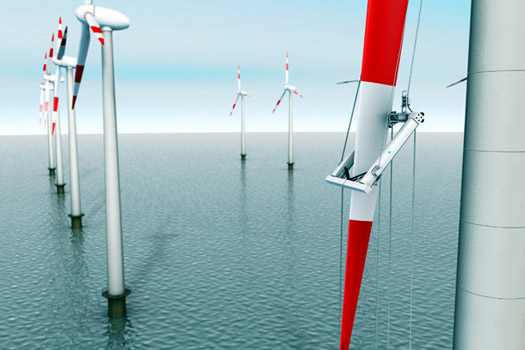 We all know that the need of the hour is alternative energy so that future generations can still breathe fresh air and have enough energy for their industrial purposes and domestic use. Many states and countries are promoting wind energy as a clean and green energy. We all know the advantages and disadvantages of alternative energy. No doubt harvesting wind for energy purposes is a good move but maintenance of wind farms has its share of headaches. Wind turbine generators already mark the horizon for miles in every direction in many parts of the world. But maintenance of the windmills has been a strenuous task for human technicians. Rotor blade damage is a routine but irritating problem that demands many hours of maintenance.

Now scientists at the Fraunhofer Institute for Factory Operation and Automation (IFF) in Germany have said they are developing a generation of robots which will be capable enough to monitor and maintain wind turbine generators on a round-the-clock basis.

END_OF_DOCUMENT_TOKEN_TO_BE_REPLACED

Wind Power Forecasting in the US

February 6, 2009 Cassandra Milligan Wind
As the prevalance of wind power increases, so does the importance of being able to answer the question, "Is the wind going to blow?" As this article on wind power forecasting points out: An unexpected lack of wind in the US can cause blackouts. This is one problem that many regions in the United States of America may face on the short and medium term as a consequence of the country's growing dependence on renewable energies, particularly wind power. With that in mind, a project is underway to make wind power forecasting more accurate. With this project, it will be possible to achieve more precise wind power forecasting in a timeline that can go up to three days. Errors in wind power predictions "can have more severe consequences in the USA than in any European country" due to the country's temperate and subtropical climate and local geography... It is expected that a less uncertain wind forecasting in a given location will have a considerable impact on the North-American electricity industry, thus allowing a reduction of wind power prices in the United States.
END_OF_DOCUMENT_TOKEN_TO_BE_REPLACED

The Latest on the Cape Wind Nantucket Sound project

January 25, 2009 Cassandra Milligan Alternative Energy, Wind
It’s been in the works for seven plus years, but in one of the Bush Administration’s last official acts, the Cape Wind offshore wind turbine project was given the go-ahead.     The project, consisting of 130 wind turbines, could generate up to 75% of the region’s electricity needs.    But there’s been furious behind the scenes political opposition, even from the likes of Sen Ted Kennedy, who spent much of the last 8 years criticizing President Bush’s enviornmental policies.    The locals were upset that the turbines would create “visual pollution” which might reduce their summer vacations just a smidgen. So last week the Interior Department issued its long-awaited regulatory study on Cape Wind, finding neglibible environmental impact, with a “moderate” scenary impact.     If the new Administration signs off, construction could finally begin next year.
END_OF_DOCUMENT_TOKEN_TO_BE_REPLACED

August 1, 2007 Cassandra Milligan Wind
Wind power grew by leaps and bounds last year, according to the Worldwatch Institute: The 15,200 megawatts of new wind turbines installed worldwide last year will generate enough clean electricity annually to offset the carbon dioxide emissions of 23 average-sized U.S. coal-fired power plants, according to a new Vital Signs Update from the Worldwatch Institute. The 43 million tons of carbon dioxide displaced in 2006 is equivalent to the emissions of 7,200 megawatts of coal-fired power plants, or nearly 8 million passenger cars. Global wind power capacity increased almost 26 percent in 2006, exceeding 74,200 megawatts by year’s end. Global investment in wind power was roughly $22 billion in 2006, and in Europe and North America, the power industry added more capacity in wind than it did in coal and nuclear combined. The global market for wind equipment has risen 74 percent in the past two years, leading to long backorders for wind turbine equipment in much of the world.
END_OF_DOCUMENT_TOKEN_TO_BE_REPLACED